On the morning of Jan. 6, I said goodbye to my dog, the lovely and talented Mia Frances Goff. She was approximately 14 years old and had battled various infections for the last few months of her life. 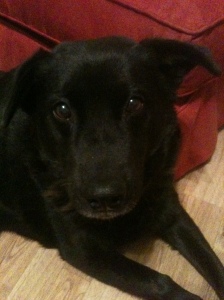 I knew I made the right decision, but it was still hard to let her go. For nearly 13 years, she patiently listened to my rants about the outside world, brought dead rats to the back door, and allowed the cat army to use her as a pillow. She rarely barked and only acted aggressively when dogs charged at us during walks. She wanted in return only food, treats, occasional car rides, and attention. And to send me judgmental looks whenever I did something stupid like straddle the window ledge and a wobbly stack of cinder blocks.

When the time came, I realized I hadn’t considered what to do with Mia’s ashes. Fortunately, one of the employees at the vet’s office mentioned he knew a lady who had planted a tree with her dog’s ashes.

I liked that idea. A couple days earlier, I had dropped Mia off at the vet’s for observation and IVs. When I returned to my car that day, the first song that played was Tom Petty’s “Wildflowers.” What’s more, I still had that free packet of wildflower seeds I had ordered from General Mills. I decided at the vet’s that I would carve out the area in front of my porch and grow a garden of wildflowers in honor of Mia.

With help from my family, that’s what I did. The packet didn’t contain many seeds, though, so I bought another one during a trip to Lowe’s.

Then, I waited for the flowers to burst forth from the earth, watering the garden on the rare occasion we went a few days without rain.

I waited weeks before I spied green emerging from the ground. But I couldn’t be sure if the green things were flowers or grass or weeds. One day, my sister said to me, “You’re growing something. I’m just not sure what it is.”

We weren’t sure because the green things had no buds. Still, they continued to grow and grow and even attracted the attention of a hungry bunny. Then, an actual weed – there was no mistaking it – showed up in the garden.

I was so upset by the appearance of that weed that I pulled it up and then moved on to those life-sized flowers or whatever the heck they were. As I did so, I ranted, “Why did you think you could grow flowers? You’ve killed two cacti and an African violet. You should invite the bunny and his friends over to feast on this greenery. At least they could get some good from this so-called garden.” 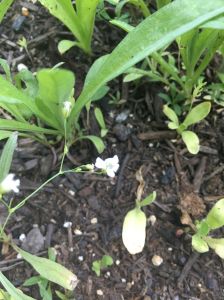 And that’s when I saw them – tiny white flowers in the midst of all that greenery.

I stopped vandalizing the green things and enjoyed the splendor of those tiny white flowers. As I crouched in the middle of the garden, I imagined Mia’s reaction to my overreaction. I could see her pretending to mind her own business whilst stealing glances at me. And I could hear Tom Petty singing, “You belong somewhere close to me.”